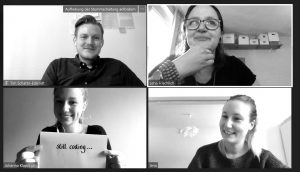 Lena Frischlich was a guest in the first episode of the “CAISzeit-Podcast” of the Center for Advanced Internet Studies (CAIS) in cooperation with the State Chancellery of North Rhine-Westphalia. The podcast deals with the question in which digital society we want to live. With Dr. Matthias Begenat from CAIS and Silke Offergeld from the State Chancellery of North Rhine-Westphalia, Lena Frischlich talks about the extent and effects of disinformation and conspiracy theories during the Corona Pandemic. She also presents her current study “Pandemic Populism”, talks about the scientific community in quarantine times and discusses the role of each individual for the digital public. The podcast can be heard here.

Svenja Boberg, Thorsten Quandt, Tim Schatto-Eckrodt and Lena Frischlich published the white paper “Pandemic News: Facebook Pages of Mainstream News Media and the Coronavirus Crisis – a Computational Content Analysis” on the platform arxiv.org.  The study analyzes the Facebook messages of journalistic news media during the early Coronavirus crisis, based on a large German data set from January to March 2020. Using computational content analysis methods, reach and interactions, topical structure, relevant actors, negativity of messages, as well as the coverage of fabricated news and conspiracy theories were examined. The topical structure of the near-time Facebook coverage changed during various stages of the crisis, with just partial support for the claims of critics. The initial stages were somewhat lacking in topical breadth, but later stages offered a broad range of coverage on Corona-related issues and societal concerns. Further, journalistic media covered fake news and conspiracy theories during the crisis, but they consistently contextualized them as what they were and debunked the false claims circulating in public. While some criticism regarding the performance of journalism during the crisis received mild empirical support, the analysis did not find overwhelming signs of systemic dysfunctionalities. Overall, journalistic media did not default to a uniform reaction nor to sprawling, information-poor pandemic news, but they responded with a multi-perspective coverage of the crisis.

In a DemoRESILdigital brief summary report, Lena Frischlich, Tim Schatto-Eckrodt, Lara Kuhlfeldt und Lena Clever present initial data on Germans’ news sources during the early-days of the COVID19 contact restrictions (March 26 – April 9, 2020) and about Germans’ exposure to distorted information during this time based on a random quota survey of the German population (N = 967, representative in terms of age, gender, and federal state). The authors examined Germans’ news sources during the pandemic and examined the relationship between using non-professional and alternative news sources and the self-reported exposure to distorted information about COVID-19. The data was collected as part of a larger, pre-registered project addressing individual risk and resilience factors for encountering and believing misleading information about the pandemic. The DemoRESILdigital brief summary report can be read here.

Svenja Boberg, Thorsten Quandt, Tim Schatto-Eckrodt and Lena Frischlich published the white paper “Pandemic Populism: Facebook Pages of Alternative News Media and the Corona Crisis – a Computational Content Analysis” on the platform arxiv.org. The study analyzes the spreading of disinformation and conspiracy theories in an initial computational content analysis of alternative news media’s output on Facebook during the COVID-19 pandemic , based on a large German data set from January to the second half of March 2020. Using computational content analysis, methods, reach, interactions, actors, and topics of the messages were examined, as well as the use of fabricated news and conspiracy theories. The analysis revealed that the alternative news media stay true to message patterns and ideological foundations identified in prior research. While they do not spread obvious lies, they are predominantly sharing overly critical, even anti-systemic messages, opposing the view of the mainstream news media and the political establishment. With this pandemic populism, they contribute to a contradictory, menacing, and distrusting worldview. Reviews of the study can be read here.

Lena Frischlich will work as interim professor for media change at the Ludwig-Maximilians-University in Munich during the summer semester 2020.

Lena Frischlich and Johanna Klapproth participated in the 65th annual conference of the German Communication Association at the Ludwig-Maximilians-Universität in Munich. The conference dealt with the topic “#Media #Human #Society. Questions and answers of communication and media science in times of rapid media change” and the DemoRESILdigital team presented various talks. The conference program can be read here.

The conceptual paper “Alternative news media” which Lena Frischlich published with Kristoffer Holt (Gulf University for Science and Technology, Kuwait) and Tine Ustadt Figenschou (University of Oslo) in the journal Digital Journalism got multiple nominations as one of the outstanding articles of 2019 as the journal announced on Twitter in February 2020. 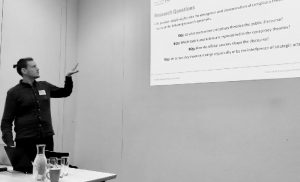 Lena Frischlich and Tim Schatto-Eckrodt joined the first 24-Hours of Political Psychology – an interdisciplinary conference hosted by the FernUniversität Hagen from 17 to 18 January 2020. The conference focused on the discussion of power and domination structures and the question of how the individual moves and behaves within them. In particular, it was discussed how xenophobia and nationalism develop, what motivates people to protest and why people adapt to systems of domination. 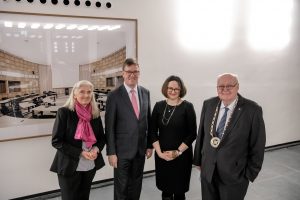 As first communication scholar since its foundation in 2006, Lena Frischlich has been accepted for the prestigious Young College (“Junges Kolleg”) of the North-Rhine Westphalian (NRW) Academy of Science and Arts. The official ceremonial act with NRW ministry of science Isabel Pfeiffer-Poensgen will take place at the 14st of January during the new years concert of the academy. Memebers of the college receive a stipend of 10.000€ per year for a period of up to four years and are provided with the opportunity to discuss their research in interdisciplinary teams within the college.